On Tuesday morning, the explosion injured at least 110 people while eight have been reported dead so far. According to reports from the Reading Hospital, four out of eight people who died were students between the age of 20 to 25. 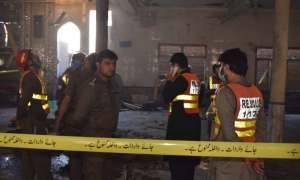 ​According to Police officer Waqar Azim, the blast took place during a Quran class in the Madrassah. The teachers of the Madrassah were also among the students. The explosive material used in the blast is said to be of 5 kg at least, according to initial reports given by the police department.
​The lady Reading Hospital spokesperson said that the injured are provided with the emergency facility and immediate attention is given to them in the emergency ward.
​The President of Pakistan Arif Alvi condemned this act and said that the terrorists responsible for this act must be apprehended and given punishment.

Remedies for Dry Skin this winters!

Feeling Anger and Sadness Are a Natural Part of Your Pandemic

Why ‘The Queen’s Gambit’ sets a new record on Netflix

7 Mehndi Songs for The Wedding Season That You Can’t...