Caroll Spinney, a legendary puppeteer behind “Sesame Street” characters Big Bird and Oscar the Grouch, died Sunday at age 85 at his home in Connecticut, according to a news release from Sesame Workshop.

Caroll Spinney, the legendary puppeteer behind beloved Sesame Street characters Big Bird and Oscar the Grouch, died today, December 8th 2019, at age 85 at his home in Connecticut, after living with Dystonia for some time. https://m.sesame.org/2P3EhIh 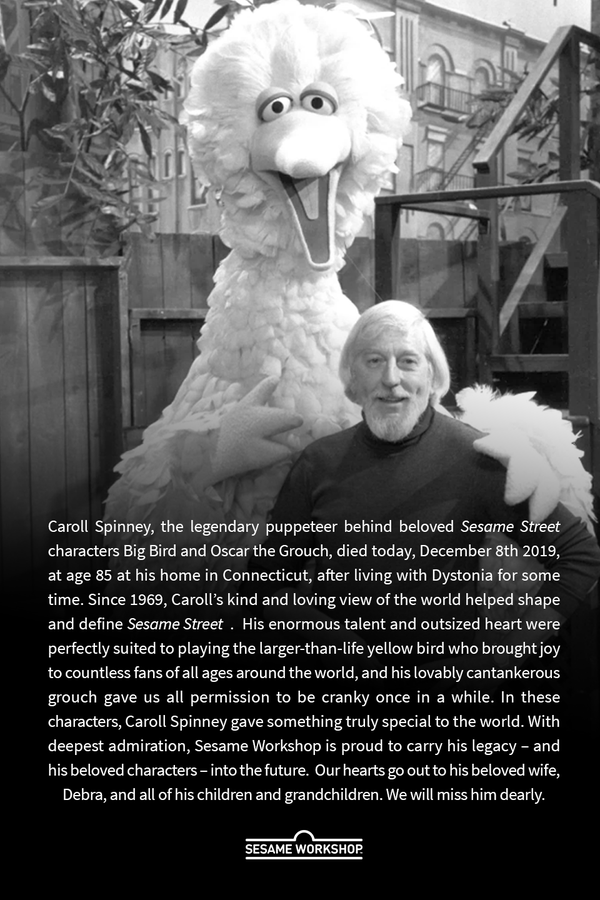 Spinney lived with Dystonia for some time

Spinney lived with Dystonia for some time, according to the release. Dystonia is a movement disorder in which a person’s muscles contract uncontrollably.

Spinney helped shape “Sesame Street” from its earliest days in 1969 through five decades.

Spinney’s career saw Big Bird visit China with Bob Hope, dance with the Rockettes, be celebrated with a star on the Hollywood Walk of Fame and a U.S. postage stamp, and named a “Living Legend” by the Library of Congress, according to Sesame Workshop.

“Caroll Spinney’s contributions to Sesame Street are countless. He not only gave us Big Bird and Oscar the Grouch, he gave so much of himself as well,” “Sesame Street” co-founder Joan Ganz Cooney said in a news release. “We at Sesame Workshop mourn his passing and feel an immense gratitude for all he has given to Sesame Street and to children around the world.”