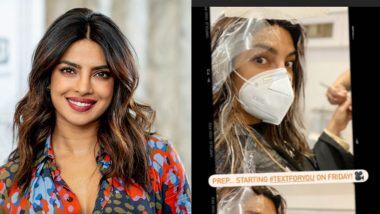 Superstar Priyanka Chopra has wrapped up the shooting of James C. Strouse directorial Hollywood film Text For You in London.

The 38-year-old star turned to Instagram and shared a picture of herself from the set of the film and wrote, “That’s a wrap! Congratulations and THANK YOU to the entire cast and crew. See you at the movies. #TextForYouMovie.”

In another Insta post, Priyanka shared a glimpse from the last day on the set of Text For You.

The White Tiger actress also thanked the cast and crew, saying “Will miss this incredible crew that I’ve spent the last 3 months with. So special to be at work. #grateful.”