Eversince veteran actor Firdous Jamal’s controversial remarks regarding Mahira Khan went viral, Mahira’s colleagues and close friends from the industry have been rushing in for her support. Hurling criticism against Firdous’s ageist and sexist comments, everyone is lauding Mahira’s compassion and controlled response and hailing her for her professionalism.

The latest one to show up in Mahira’s strong support is none other than producer Momina Duraid who gave Mahira her first major breakthrough ”Humsafar” and is also producing her upcoming film ”Superstar”.

Momina while criticizing Firdous’s remarks announced that her production company M&D Productions won’t be working with the actor in future in any capacity, further saying that ”we are ashamed of him to be a part of our fraternity”. Momina further lauded Mahira for her restraint saying, ”She could have reacted in the worst possible way to Firdous Jamal Sab’s disrespectful and regressive coments about her and she had every right to do so. But responce to all the people who spread hate was to spread love and be positive only. That is the true sign of a woman who is strong and secure”. 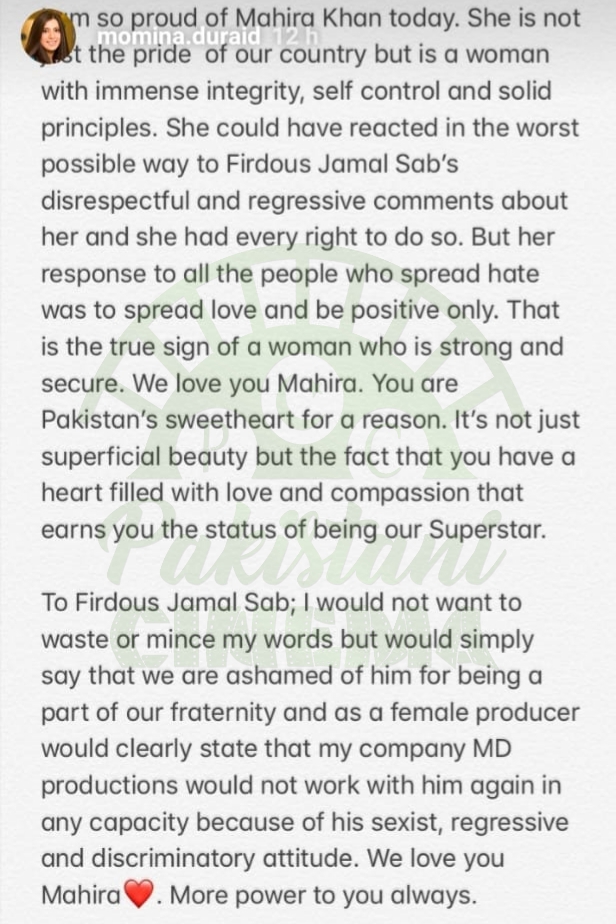 While Momina has come up with a friendly gesture for Mahira we await how Firdous Jamal responds to the scenario.

The famous aunty is back – Woman who misbehaved with traffic police, goes viral again!

Iffat Omer demands protection for the honor of celebrities