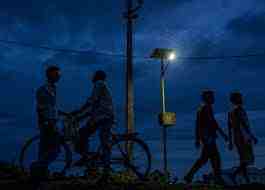 Almost five years ago, I saw a girl while going to work during my night shift. She was standing on the same bus stand as I was. The reason she grabbed my attention was. She seemed to be tensed and there was a lot going on within her. She was in a rush. She made a call to someone and somehow managed to make that person believe that she will reach as soon as possible. The bus arrived and she ran towards the door of the bus and I followed her footsteps. She was continuously using her phone until the bus stopped. Luckily, we had the same stop. Now the curiosity within me increased even more than ever. So, I forgot where I had to go and I followed her. My intentions were not at all wrong. But there was something that kept me followed her throughout. we both were lost in our ways and kept me behind her. Finally, She stopped at a small shop and looked around. She quickly took out the money and asked the shopkeeper for something. She took it from him and began to walk. She was very much tensed. I so wanted to ask her if she was okay but the other side of me wanted to know the complete story which was only possible if I not let her know about me. The more she was reaching somewhere the darker it got. We finally stopped outside a small house which was not in very good condition. I hid behind a wall so she won’t be able to see me. She took the keys out and got herself inside. As she went in, I quickly came near the door to see more. I heard her talking to someone. She was polite and told someone there that she won’t leave again. While I was listening to her, I noticed that the door wasn’t completely closed. So, I very carefully tried to slightly move the door to see her. Unfortunately, I couldn’t see her because she went in. With a lot of courage, I managed to get in. I went in. It was all so dark that I was hardly able to see someone. I got into the kitchen and noticed that there was no food. I felt a bit weird because it seemed like no one came to that place for ages. I was all occupied with my thoughts that suddenly she came behind me and called my name. I was so scared as if it’s the last day of my life. I was about to run but then she in her very polite voice asked me to stop. She said she won’t hurt me. I asked her if she was some ghost. She laughed and said no. she told me that she saw me so many times on that bus stand and never had the courage to talk. She then said that she did it all intentionally in order to get my attention and she was sure that I will come after her and that’s how she will be able to talk to me. Today after five years she is sitting next to me and is now my wife. That’s how I met her.

“There was a time when I was also using fairness creams.”: Amna Ilyas

We took a dig at 2 biggest food delivery apps in Pakistan and here is what we found out!!!

Here is why you should have this golden drink

First look of the morning show is finally here