Disclosed the reason of WhatsApp/IG/FB outage! 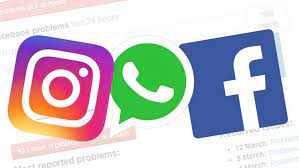 “Sorry for the disruption today, I know how much you rely on our services to stay connected with the people you care about.” said Mark Zuckerburg who’s the CEO of Facebook.

Being soundly apologetic, it was this first time ever that world’s top 3 platforms that is’ Facebook, Instagram and Whatsapp, went down and that also for 6 hours straight. Everybody was as confused as you are while reading this blog, it was difficult for everybody to stay connected and in contact. The audience of Twitter arose and Facebook faced a huge loss which affected around 10 million plus users in just a few hours!

After this massive outage, Facebook explained that it was not at all because of any system’s hacking nor a virus but it happened because there was a disruption and the routers which are responsible to coordinate the traffic of the network between the application and the data centres were interrupted.

There were just a few tools and inside settings that were disturbed after this outage and no serious losses were faced in the applications, said Facebook. The issue was not discussed in detail by the company, however the statement was clear that it is back on track and the users are live all over again!

SAFETY PACKED IN A POUCH!

Get ready, to get dazzled this Eid