Faryal Makhdoom shares the happy news with her followers

The unstable marriage of boxer Amir Khan took a U-turn seemingly for the better when excited mommy-to-be Faryal Makhdoom revealed that she is expecting her second child.

Faryal posted on social media early on Sunday that she was waiting to announce the special news:

Faryal made the pregnancy announcement on her social media accounts, saying she had been ‘blessed with baby number 2’.

While sharing such happy news with her followers on Snapchat, with a caption saying:

“I’ve been waiting to announce something very special …. Alhumdulilah, I am pregnant with my second child. “Time for me to get fat and chunkayyyy.” 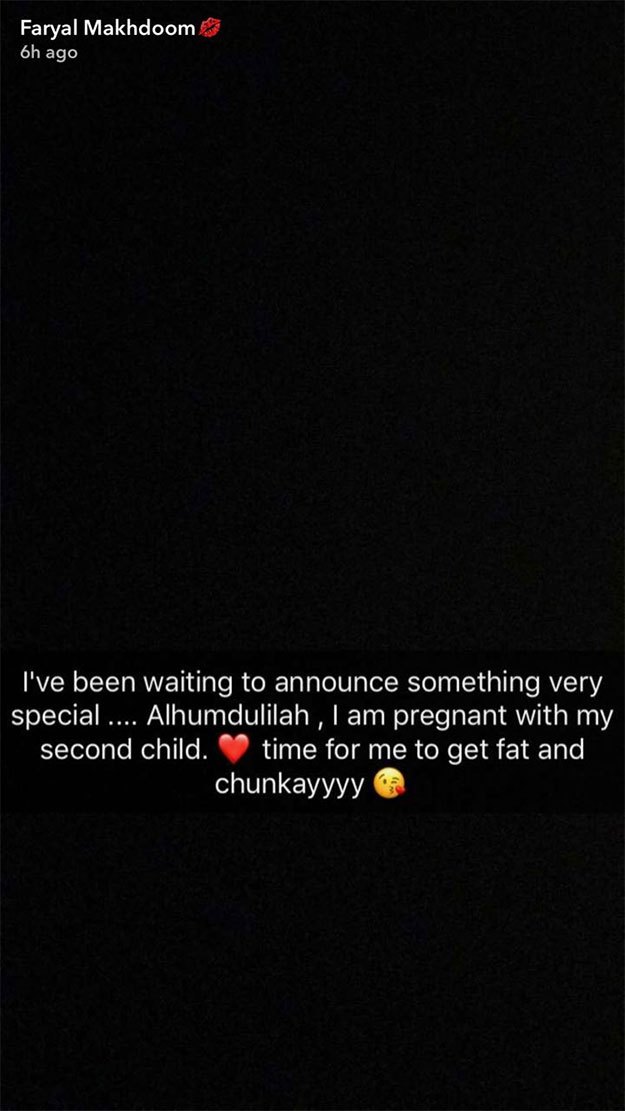 After an ugly Twitter fight that led to what appeared to be a split between the couple, the two now apparently rekindled their relationship.

Faryal Makhdoom had tried to patch things up with husband Amir Khan hours after the two took their fight to Twitter, with the British-Pakistani boxer accusing Makhdoom of cheating with fellow boxer Anthony Joshua.

“The screenshots sent to Amir were ‘fake’ and Amir thought Joshua and I were speaking… when we have never even met.”

“Anger took the better of him and he tweeted away without thinking there was absolutely NO truth to it.”

“It’s all cleared up with both teams now and again, there was NOTHING like that going on. Apologies for all this nonsense. Let’s get on with life now…”

However, the boxer Amir appeared to have accepted her apology, as he tweeted Joshua her note acknowledging that there was no truth to it and wished him all the best.

On the good note, we congratulate the couple and hope things work out in their favour.

Stay calm! Dhinchak Pooja is not going to be a part of Bigg Boss Season 11