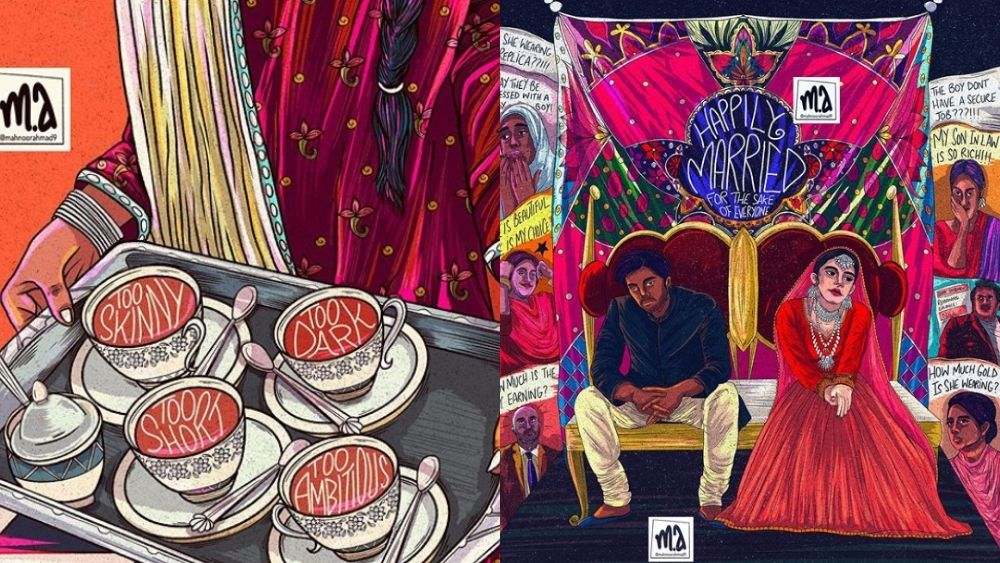 Pakistanis as a society live under many taboos considered as social norms to abide by, out of which the most disturbing is the pathetic rishta culture followed by our people regardless of class, creed and caste. It is one of the most disturbing norms followed and preached by our society; where parents of the boy look around visiting one house to another in seasrch of the girl who would be their son’s perfect match. Might I ask, what are the criterias to a perfect bahu? Or should we rephrase that by asking, how is a girl known to be eligible for marriage, moreover perfect enough to be the chosen one?

In our society we first set a standard that who are eligible for being our daughter in law or son in law . Most important things that are considered mostly consist of all superficial things for girls specifically for example:

The conquest for the perfect bahu starts from being of young age, having a doctorate degree, light milky complexion, long shiny hair, to being the best chef-at-home and perfect care taker of the house & family and let’s not forget the DOWRY. In short, why not summarise the selection criteria of that being one for trying to find the perfect Bakra for Qurbaani at Eid.

Part of the horrors stem from the chivalrous act of both families while choosing the perfect match for their children. In most cases the families don’t even bother asking the children for their consent before finalising one of the most crucial and important stage of their lives. What matters more than character arestarting from the ‘rishta picture’ to the girls’/boys’ ethnicity, age, complexion, weight and income. If the girl refuses to be a part of the process, then she is often a victim of emotional manipulation, blackmailing, and societal pressures.

“I once got a rishta to which I promptly said NO. My parents still called them over and yelled at me to be quiet.
Later, while they did not like him either, they broke my trust… that in the end, it would never be my choice.”

An example of questionable consent in the rishta culture.

However, being married isn’t easy for either of the genders. For a man, apart from the emotional bond that they have to form, they are also under the constant pressure of making ends meet. Sure, if he belongs to a financially stable family, the pressure is almost not present but majority of our population struggles with finances. Families almost ignore these mere facts/scenario’s because getting their son married and having his child play around right before their eyes are the only things that seem to be important!

Year after year, girls and boys alike go through this same mockery. While it is wise to say that its not the same for everyone, some happen to be lucky to stay afloat, whereas many surrender and others get shamefully rejected. Mariage is supposed to be a bueatiful part of ones life, it shouldn’t become a stage of auction for some girls for they too happeb ti have dreams and ambitions. Its about time to break this taboo and give every young individual the freedom to pursue their dreams abnd find the perfect spouse for each other. Let them choose a partner who respects their wishes and that too when they feel ready to step into the prestigious bond of marriage.

Find My Doctor: Medics at your doorstep checking for coronavirus