PTI MNA Aslam Khan and his guards beat the staff of a mobile shop owner but why? 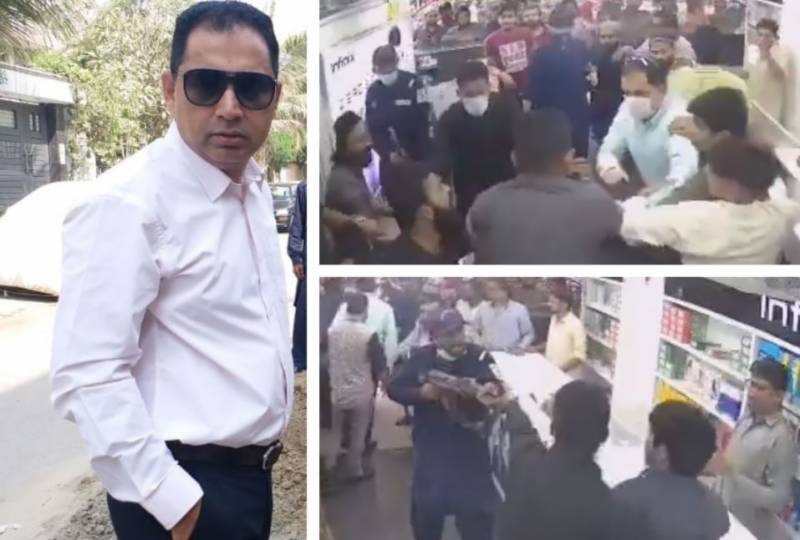 In a recent act of power abuse, if proven to be the case, PTI MNA Aslam Khan’s video has been going viral since last night of his scuffle with a mobile shop owner at the renowned Saddar mobile market, Karachi.

As mentioned by substantiated victims and witnesses to the rift, the MNA came into the shop with his guards and friends/relatives and after a heated argument he was seen physically assaulting the shop owner as he suddenly slapped him, which then led to the guards of the MNA pointing guns at the staff and leaving the shop with one of the staff members – making it a police case which is underway.

Here is the viral video where the PTI lawmaker and his guards can be seen punching and kicking the mobile market’s shopkeepers.

MNA Aslam Khan, along with his friends and security guards, beat the mobile phone shop staff after a heated argument that started over a mobile deal earlier, said the mobile market administration. It is not yet clear on why the scuffle between the shopkeepers and the PTI lawmaker took place.

In the CCTV footage, we can see that the people accompanying the MNA drag out one of the shopkeepers with them. The market association claimed that it was he who had initiated the argument and physical assault however while dragging out one man with him, he called the police himself in unlawful abuse of his power and authority.

Representative of the association of Karachi traders also went to the police station to register a case against the MNA.

Whilst trying to reach out to MNA Aslam Khan’s team for their point of view, they have  refused to give any sort of statement on the viral feed saying that the matter is being dealt by the police now.

On the other hand, the leader of the Karachi mobile market, Minhaj Gulfam, said that despite their requests to finish the matter, Khan registered a case against the shopkeeper. It can be been seen in footage that who started the quarrel, he added.

SSP South says that according to a shopkeeper, Khan slapped him first. “We will come to a conclusion only after an investigation,” the police official said.

This is not the first time that lawmaker Muhammad Aslam Khan has been in any controversial situation. However he has previously been indicted by a customs court in Karachi regarding a case pertaining to alleged smuggling and tax evasion as well.

What do you think of this viral feed, is it a mere one to one man argument that led to a physical fight or a clear case of power abuse by the MNA?